Reconciliation and the 2015 Federal Election 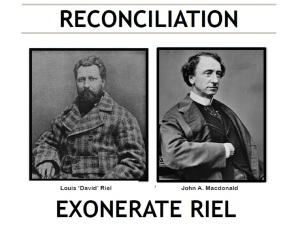 The President of the British Columbia Métis Federation, Keith Henry, issued the following statement in 2013 on the occasion of the commemoration of the execution of Louis Riel—November 16, 1885—Louis Riel Day:

… the Métis community throughout British Columbia is thirsting for Métis culture and education about our history… The question remains now where do we go and it is clear to the BC Métis Federation that Louis Riel needs to be exonerated by the Government of Canada without delay… Louis Riel is a Métis hero and it is our duty and obligation to readdress this historic injustice and carry forward with Métis pride.

Yesterday (Sept 29, 2015) the Liberal Party of Canada released its Real Change “Advancing and Achieving Reconciliation for the Métis Nation.”

This document provides for:

What this “Reconciliation” document does not include is the formal Liberal commitment of the 1990s in Gathering Strength – The Aboriginal Action Plan to review “Louis Riel’s proper place in Canadian history.”

No attempt at reconciliation with Aboriginal people can be complete without reference to the sad events culminating in the death of Métis leader Louis Riel. These events cannot be undone; however, we can and will continue to look for ways of affirming the contributions of Métis people in Canada and of reflecting Louis Riel’s proper place in Canada’s history.

Louis Riel’s exoneration remains key to any true reconciliation between the Métis and Canada While Mr. Trudeau has promised to recognize Louis Riel – in 2014 the NDP committed to the “Exoneration of Louis Riel.”

Each year, Manitobans celebrate Louis Riel Day to remember the important role Riel played in defending Métis rights and in Manitoba’s entry into the Canadian federation. New Democrats recognize the work of Louis Riel—one of the first great Métis politicians who fought to protect the French language and the rights of minorities.

This day is also an opportunity to highlight the many contributions of Métis people to Canada’s growth and development. Today we call on the government to recognize the founding role of Louis Riel and restore his rightful place in our history. We renew our call for the government to reverse his conviction. We seek to have Louis Riel exonerated, as a vital step towards healing the relationship between the Métis people and the Government of Canada.

The NDP wishes to work alongside the Métis to create a fairer, more inclusive country and to achieve Louis Riel’s vision of a Canada where there is justice and equality for all.

As the 2015 Federal Election draws near a commitment to Louis Riel and the Métis is needed – including, as Riel requested at his “fitted-up” trial upon being found guilty of the capital crime of High Treason

An Enquiry into the Career of Louis Riel