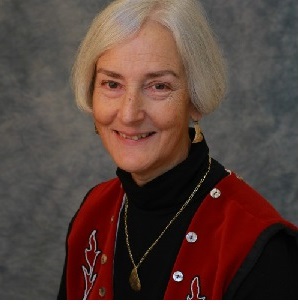 WHAT DOES IT MEAN TO BE A FRIEND OF LOUIS RIEL?

I am grateful for the opportunity to speak to this gathering today and to you for having gathered as we commemorate a somber day in the history of the Metis and of Canada: the grave miscarriage of justice which resulted in the execution of Louis Riel.

What does it mean to be a friend of Louis Riel?  Who am I, for example, even to claim such a relationship?  The answer may lie partly in the one thing Riel and I have in common:  experience with citizenship in both Canada and the US.  Of course the circumstances surrounding that commonality are completely different, not to mention being 118 years apart.  Riel, born in Manitoba, found temporary refuge in Montana from Canadian persecution.  I, born in Alaska, found dynamic satisfaction in British Columbia with a Canadian husband.

The commonality, however, regardless of reasons and time frames, is the fact that the cause of justice transcends political and geographic boundaries.  An event is either fair or it is not regardless of where it occurs.  Anyone who recognizes that the treatment which Riel and the Metis received was grossly unfair and who wants to do something about it is a friend of Louis Riel.

Such a friendship must be both authentic and constructive, and based in a story of relationship. Louis Riel’s story is complex to say the least, as were his relationships.   What can we learn by taking a look at what it meant to be a friend of Louis Riel when he was alive?  Who were his friends then?  Did he even have any friends?

Like most great leaders before and since, Louis Riel either had very few friends or he had thousands of them, depending on how things were going at any given time.  It also seems safe to say that, given what we seem to know about his personality, he was probably not the easiest person in the world with whom to be friends.  Among his other qualities, he was brilliant but he could be impatient.  He was single-minded but he could be moody.  He fought for his people, but his military strategy could be frustratingly peace-based for some.  He was a spiritual visionary and imaginative theologian, but he could be hard to understand.  It seems that those who knew him or knew of him believed Riel to be either an inspiration or a threat.

As I read his story, and I am relatively new to much of it, I would number his true friends as few indeed.  Certainly Gabriel Dumont was a friend, maybe the most loyal of them all. Honore Jaxon was his friend.  I imagine his wife Marguerite was his friend, though they were parted by circumstances for long periods of time.  In their own way, Chiefs Poundmaker and Big Bear were friends.  James Taylor, the American consul in Winnipeg who interceded unsuccessfully on Riel’s behalf, would have thought of himself as a friend; certainly, he respected the Metis leader tremendously.  The thousands of clemency petition signers from Europe, the US, Quebec and other parts of Canada might not have characterized themselves as Riel’s friends, but certainly they were his sympathizers.  From his own perspective, I think Riel himself knew he had one friend for sure, and that was his God.

In short, friends of Louis Riel, then as now, came from a variety of backgrounds and expressed friendship in a variety of ways.  What they held in common was an unwavering belief in the cause of justice for a disenfranchised and displaced people, whose land was stolen, whose culture was discounted and whose rights, once supposedly assured, were totally and willfully violated.

Unfortunately, now as then, much of this situation for the Metis has not changed.  And so Louis Riel’s friends, now as then, in addition to championing the cause of his exoneration from treason charges have a lot of work to do.  What characteristics do his friends now need to further this cause?

Friends need to know and be able to tell clearly the story of late 19th century Canada to early 21st century Canadians.  Point out, for example, that the high treason charge lodged against Riel was specifically chosen so that the only outcome of a guilty verdict was execution.    Riel, an American citizen at the time, should never have been prosecuted under this medieval British provision.  Explain that the trial venue should have been Manitoba, where rules of court procedure were in place, not Regina where territorial rules were unclear or nonexistent.  Insist, as Riel tried to do, that his defence was not insanity, but rather a patriotic concern for the welfare and rights of the Metis people.  As former Prime Minister Joe Clark put it over 20 years ago, “Riel paid with his life for the maintenance of the rights and freedoms of the Metis people.”  More recently, Chief Justice Beverley McLachlin put it this way:  “Riel fought against Canada in the name of values that Canada now proudly embraces:  respect and accommodation for pluralism.”

Clark and McLachlin display friendship for Louis Riel, a friendship we seek to emulate and further.  As they have, we also need an awareness of the surrounding historical and current issues facing the Metis.  In terms of land rights, culture and meaningful recognition in the context of today’s Canada and oft heard pledges of reconciliation and recognition, these issues remain largely unresolved.

Lastly, friends need a willingness to be labeled just a little bit crazy ourselves.  As you know, pronouncements of insanity swirled around Riel most of his life.  However, I am not talking about clinical craziness.  Nor am I talking about legal definitions of mental capacity.  “Crazy” in this sense is the term detractors often fling at people of passion and values who take action against injustice.   In some communities, though, such people are called saints and heroes.  In this particular place and time, they are called Friends of Louis Riel.