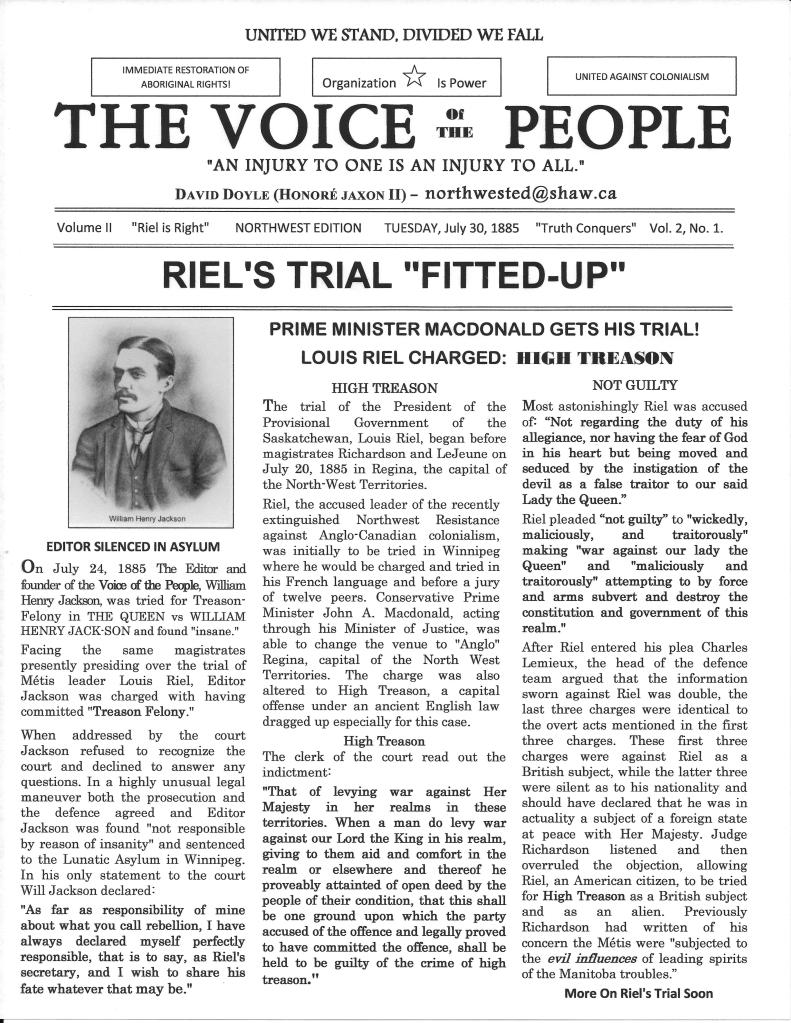 William Henry Jackson (Honore Jaxon) was the Editor of the Voice of the People newspaper in the Great Northwest in 1883. He would go on to lead the Farmers and Settlers Union and join with the Metis leader Louis Riel in establishing the Provisional Government of the Saskatchewan and the Revolutionary Bill of Rights of the Saskatchewan 1885.

In the Northwest Resistance that followed Will Jackson would be arrested and tried for Treason by the government of John A. Macdonald. At his trial both the defence and the prosecution found Will Jackson, the only whiteman charged, “not responsible” and “insane.” Sentenced to the Manitoba Lunatic Asylum he was unable to testify as a witness for Louis Riel at his trial for the crime of High Treason. Jackson would escape to the United States and taking his Metis name, Honore Jaxon, seek justice  for Riel for the next sixty-six year.

Honore Jaxon and his Louis Riel Library and Archive were evicted from their home in New York’s Bowery in 1951. Jaxon wished to see his library shipped to the Northwest as a resource library in the struggle of the Aboriginal Peoples for justice. Most of the library was shipped off on a garbage scow on the Hudson River.

David Doyle has been On the trail of Louis Riel since 1985. Continuing the work of Honore Jaxon, seeking justice for Louis Riel, David Doyle has created calendars, videos, books, and lesson aides to assist in recognizing Louis Riel’s proper place in Canadian history. David Doyle was made an Honorary Metis and recognized as Honore Jaxon II in 2013. 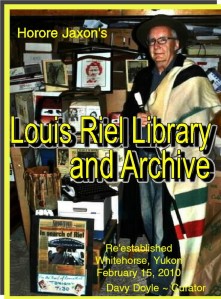 As an activist seeking justice for Louis Riel and historical recognition for Honore Jaxon, David Doyle will take over from Will Jackson and re-open the Voice of the People newspaper for the twenty-first century David will also continue the work seeking to have Louis Riel exonerated and recognized as Our Aboriginal Father of the Canadian Confederation.